Mystic Treasure is a 100% decentralized Play-to-Earn, Learn-and-Earn RPG adventure game enhanced with simulation. In this world, players are entitled to the ultimate power to fully customize their “virtual life” through these experiences:

– Personalizing your character and competing with each other.

The entire game takes place entirely on-chain, from item crafting, and receiving items to complicated PvP. This means that the game can continue to run well even if the company is unavailable.Everything in the game can be considered to be totally owned by the users, with the exception of occasionally uploading patch updates on-chain so that changes can be broadcast to the users.

And with these special features, we firmly believe that Mystic Treasure will be the number one choice for those seeking a not only entertaining but profit-making game.

The market for NFTs is likely to grow as the habit of having unique digital assets such as music, films, and photos grows. According to new industry data from Global Market Estimates, the global non-fungible tokens market is expected to increase at a rate of 185 percent between 2021 and 2026, with gamers accounting for a significant portion of this development.

With Mystic Treasure, we hope that the increasingly powerful blockchain application will reach even further, finding its way to every corner of the world, to support everyone, not just gamers knowledgeably and financially.
Mission

Play-to-earn is gradually picking up the steam in this crypto-verse. A growing variety of skill-required NFT games are being developed. Passionate teams are working behind the scenes to enable non-professional gamers to make a fortune while playing these games. The award will be offered to all gamers willing to put in their time and effort.

However, those game producers lack creativity whose games are made from existing products that have been added “blockchain features”. Gamers are bored with the rhythm of heroes, breeding
pets, and battling for tokens. And we believe it is time for Mystic Treasure to show up on stage and bring a new “Learn and Earn” experience for our dedicated users and blockchain-verse.

Since ancient times, the Mystic world was divided into 5 different regions along with countless legends about valuable ancient treasures that have been forgotten. The owners of these treasures were said to have died in war or sometimes, they belonged to pirates or the treasures of kings.

“The treasure map or the hidden island of gold are just fairy tales to fool children” will gradually fade into oblivion, but suddenly, the famous couple Garnet and Flecht have successfully discovered it.

Countless jewels and ivory and mysterious costumes with extraordinary power are waiting to be found in Palembang – a land with dense forests that has spread across the five continents and four Mystic seas.

Guanabara: Buried under the snow, Guanabara is said to be the land ruled by the Ice Queen. Contrary to the cold outside, this land has been chosen by many tribes as a place to hide manytreasures. Many maps in this land have been recovered and are being sold everywhere on the black market. 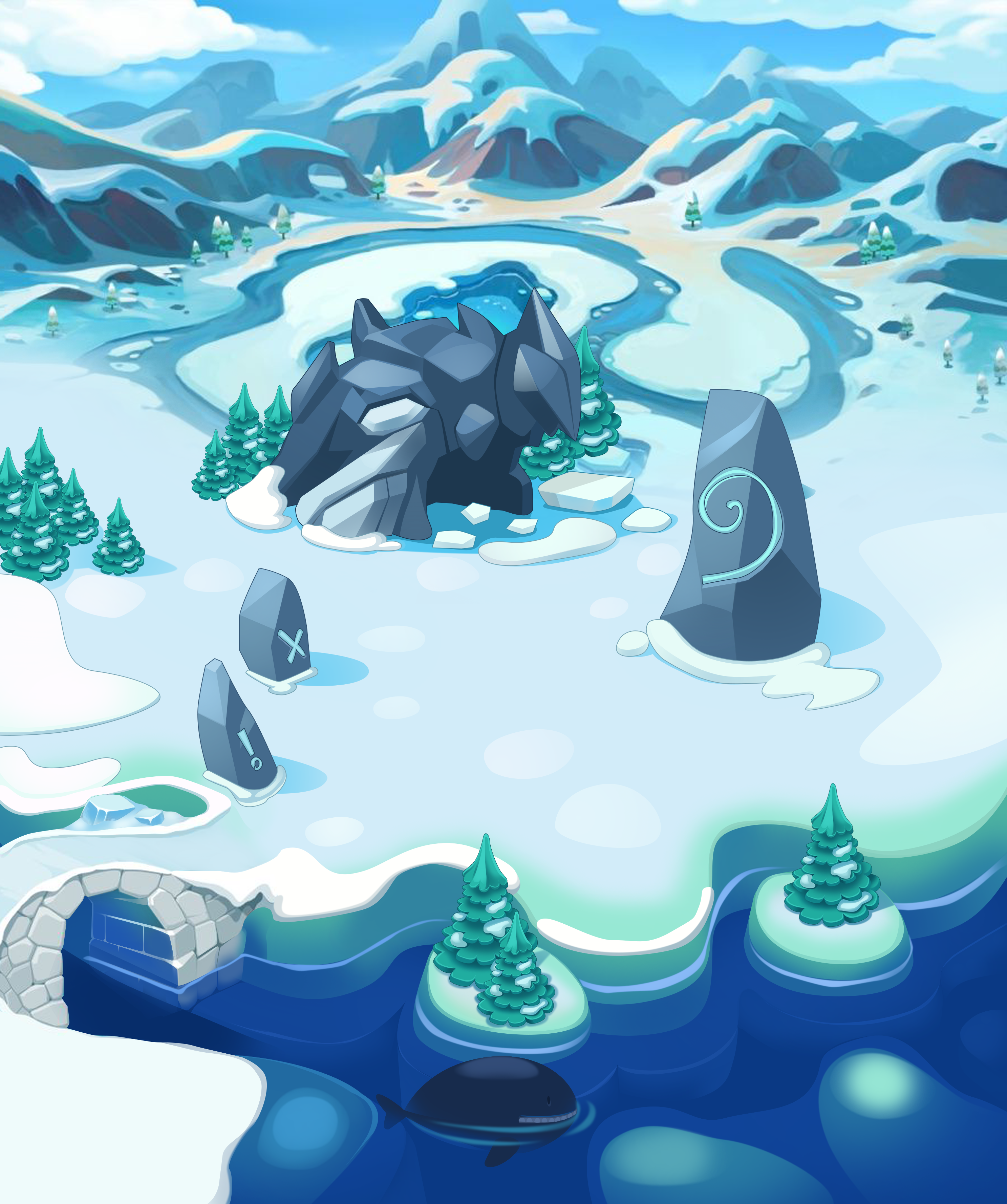 Karrakoram: This is probably the most barren land where most of the area is covered by sand desert. However, this region is known as the world’s largest “black gold mine”. Because of that,despite the harsh living condition, Karrakoram is one of the most affluent lands in the Mystic World.

Caminito: An island in Mystic Treasure, Caminito was once a haven for many pirates lost in battle, escaped slaves, or starving around the world gathered here. It was also in this land that manypirate treasure maps were spread throughout the lands of the Mystic World.

Puensum: As the land of the Indian tribes, this place possesses a lot of rubies and diamonds. However, hunting for treasures in this land is not easy because they are all protected by indigenousIndian tribes. 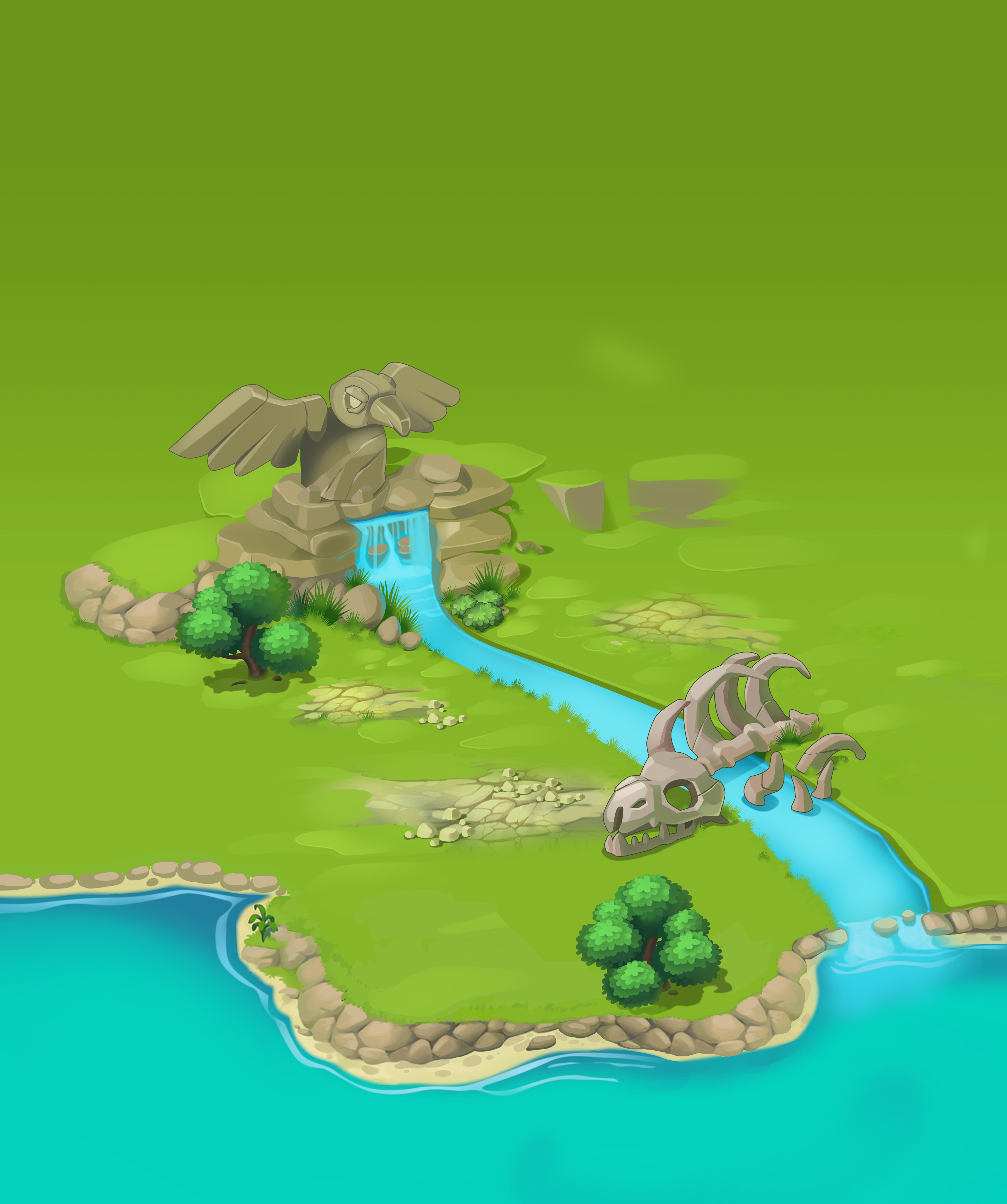 Palembang: A land located in tropical weather. It is not difficult to understand the area of Palembang consists of vast forests, rivers, and lakes. This area is also inhabited by many tribes, so warsoccur very often. Because of contention, the victorious tribes often collect pearls, ivory, and treasures and carefully hide them away. Therefore, it is not difficult to understand that in this land, thereare more treasure maps than in the other 5 lands of the Mystic World.
Game Features
1. Housing
If you don’t own a house, you literally can’t do anything. That’s true in life and the same rule applies to Mystic Treasure. Players are required to buy the houses and these will act as the supplement for in-game character’s stats such as expanding the warehouse’s slot, increasing movement speed, or protecting you from other threats.
Your house can be upgraded with the required materials. After renovation, players can unlock more space with additional features such as extra storage slots, improve qualities, and house fortification. 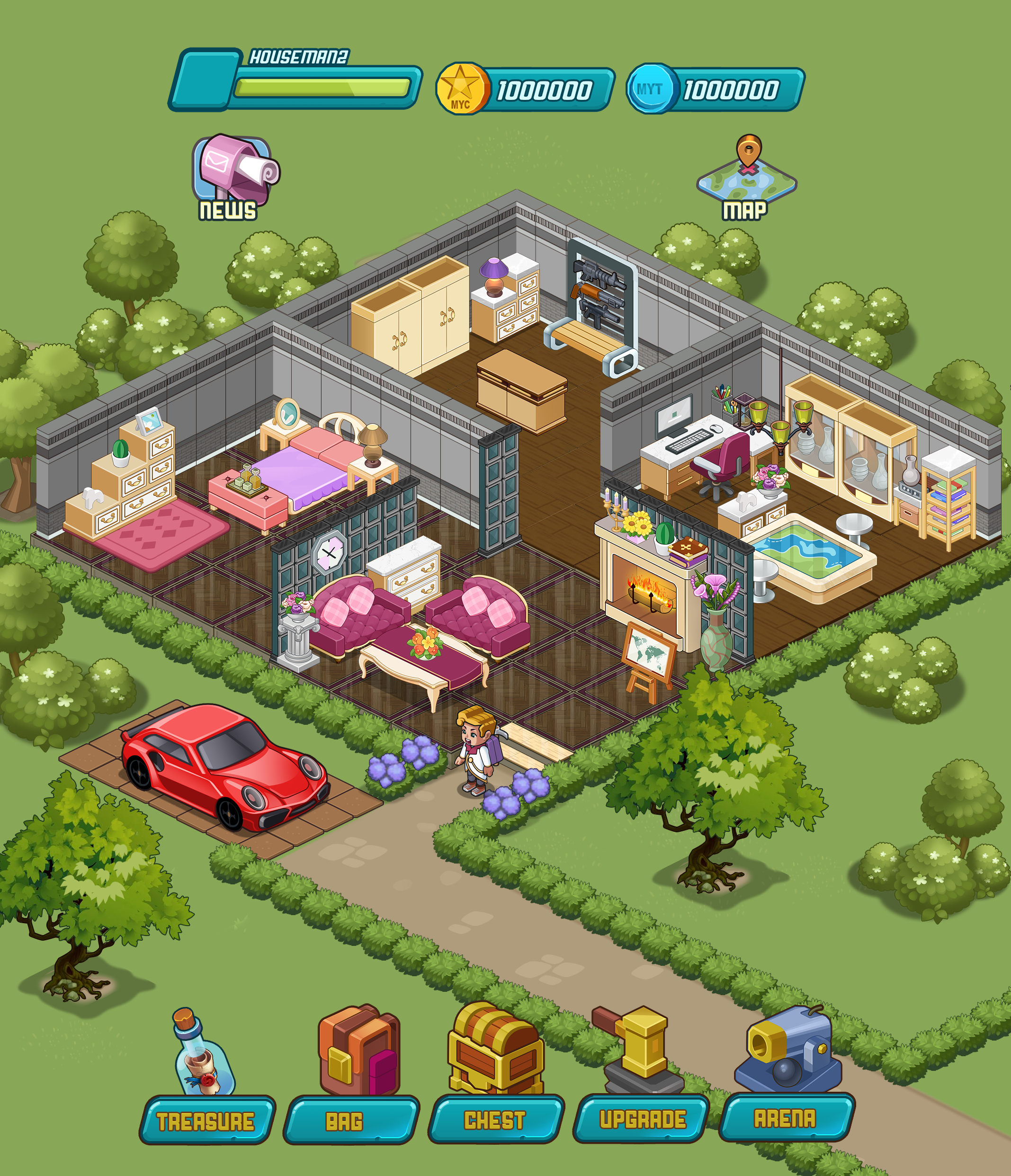 2. Equippment
There are 7 slots to customize your fictional character. These are hats, shirts, trousers, shoes, weapons, vehicles, and fashion items. All the items you found in the treasure will be available in“Inventory”.
The color will define the rarity, and the star defines the tiers. If you own a Gray AK47, and your opponent has the same item as you but it’s Green. If you get into battle, your foe wins because Rarebeats Common. The same rule applies to tiers. The more stars you get, the more powerful your weapon is. 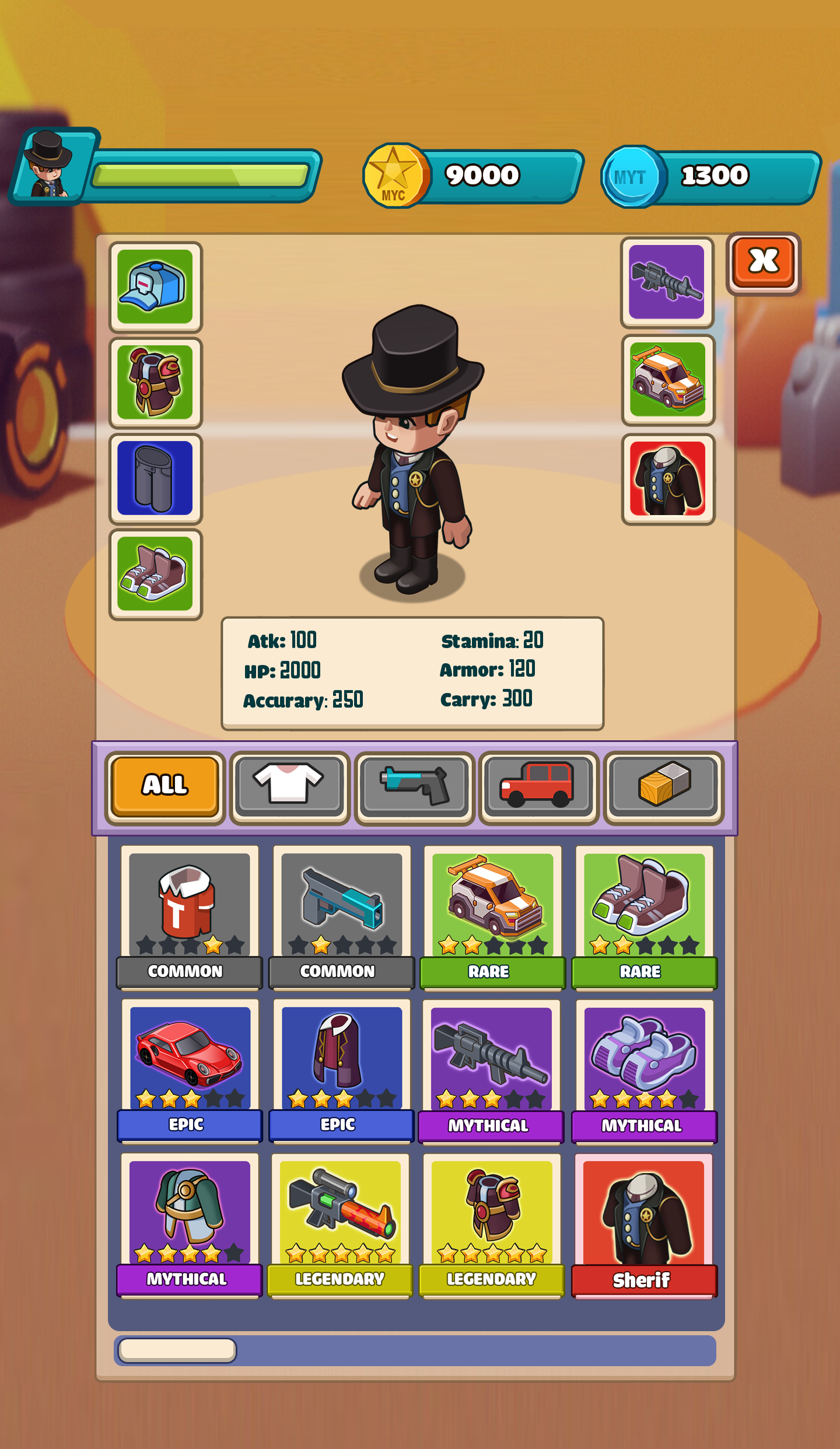 3. Update / Craft
Players can craft and upgrade equipment if they have enough materials
Upgrading: To upgrade, players need 2 identical items to level up. Leveling up items enables users to gain additional stats.
Crafting: Players need to earn enough materials to craft items. They can get equipped or sell back to the marketplace in exchange for tokens 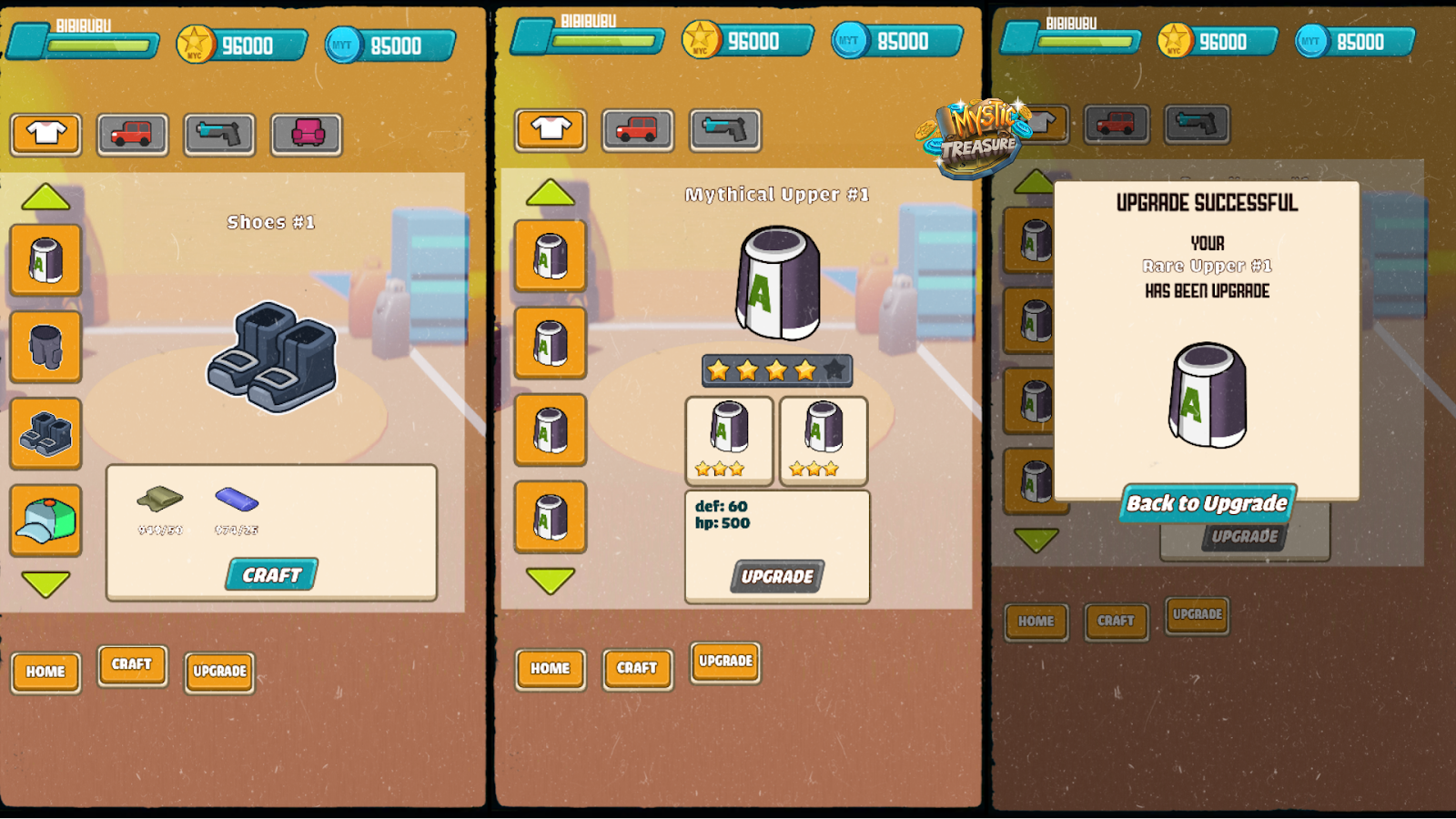 4. Treasure map
The difficulty of the question varies on the rarity level of the maps. The higher the rarity level, the more complicated the quiz. And there are 10 multiple-choice questions for you to resolve. Foreach map, you are allowed to have the wrong answer 3 times which is demonstrated in 3 hearts. 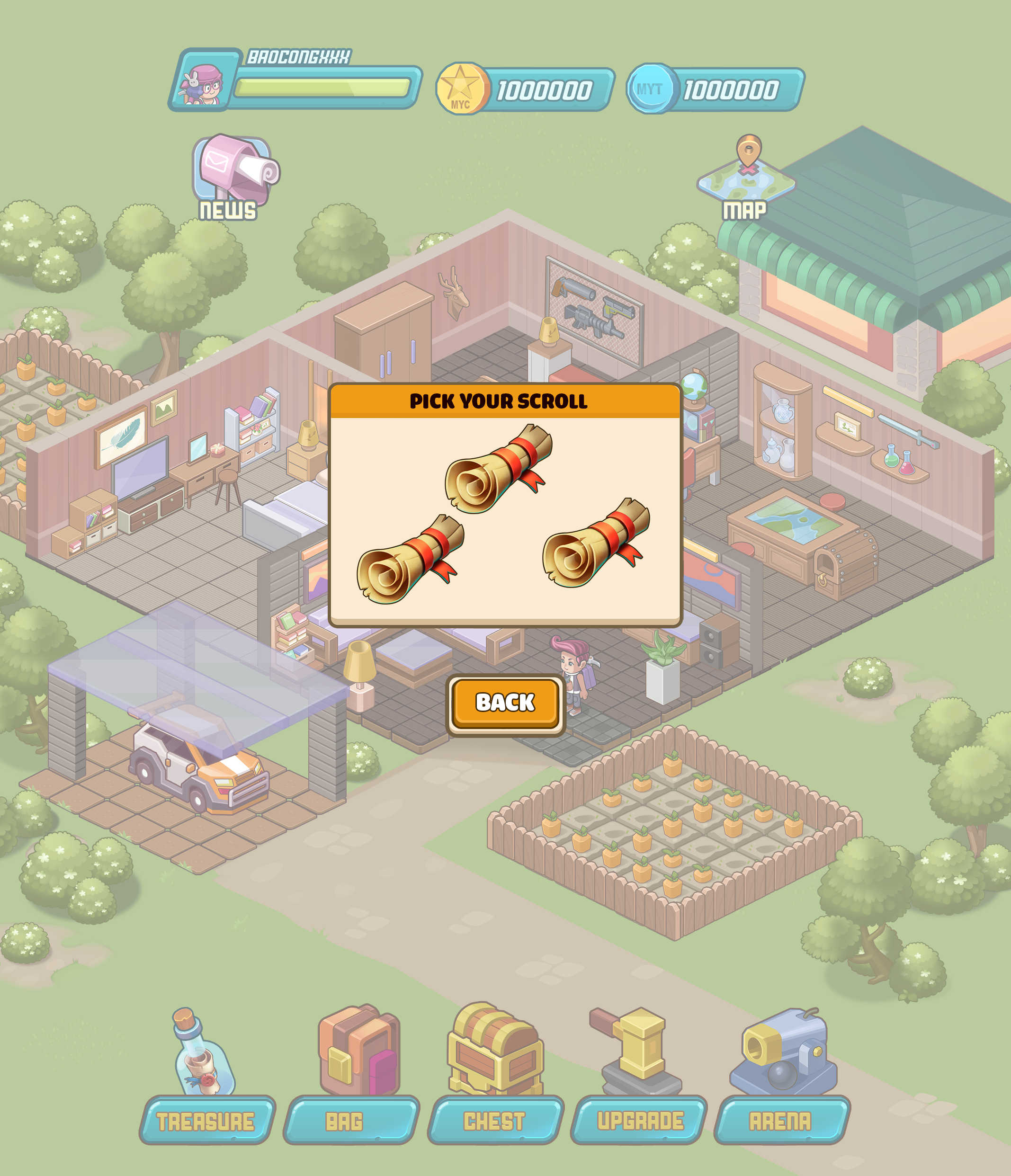 5. Mining treasure / Stealing
Mining System: After successfully answering the questions, the map then leads you to the treasure location. You can see the location will detail what kinds of materials are available to obtain andtheir quantities. These materials are critical to building and upgrading houses, items, and blueprints in Mystic Treasure.
You can also see different players cultivating the resources in the same location. The progress bar with 5 chests shows the time you can claim each reward in single harvesting.
Stealing: The item will be dropped into a temporary bag and can be partially robbed by other players. 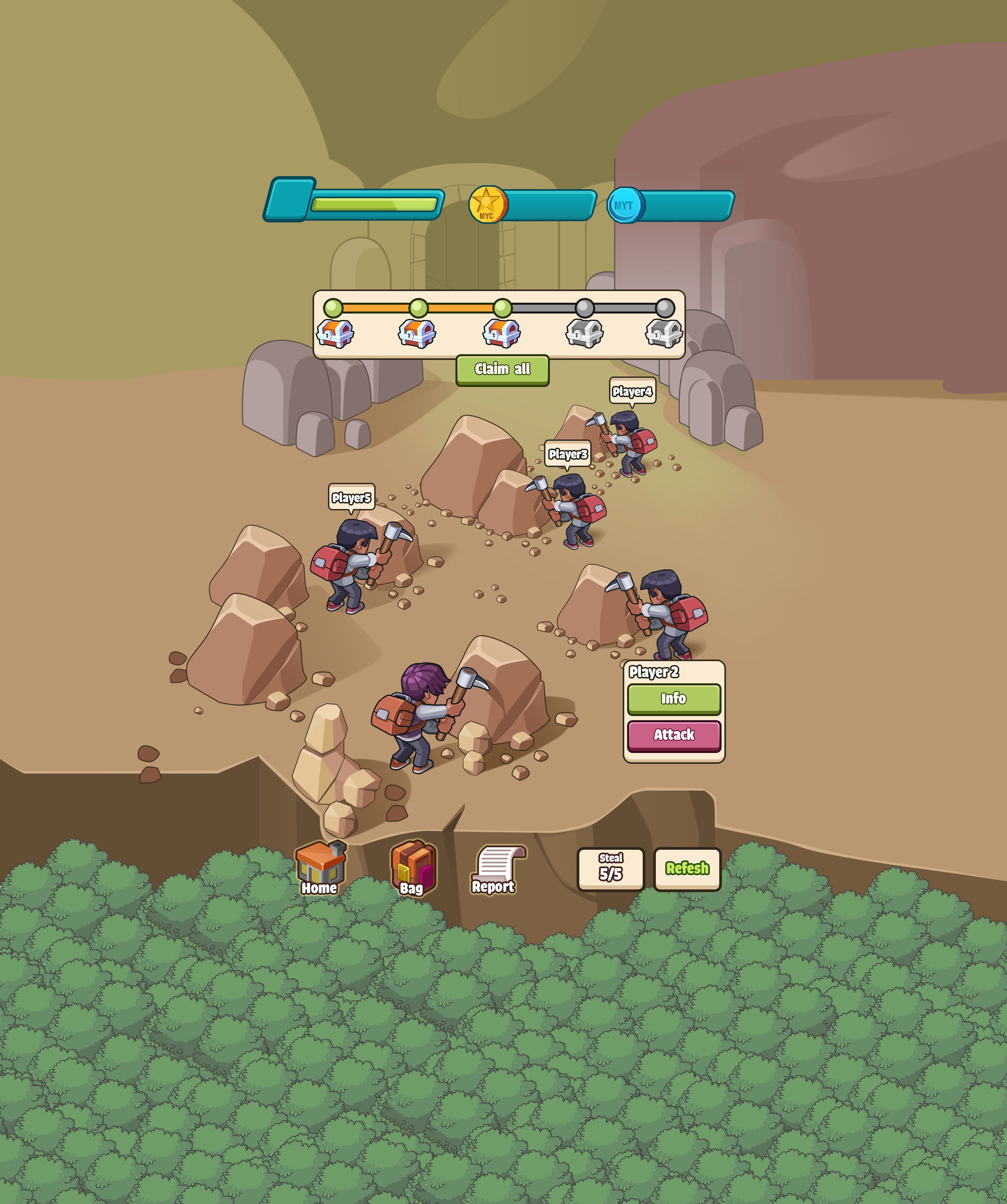 World Arena: Players will compete with people across the server. The winner will receive 50% of the prize pool. 50% is charged to support the Play-to-Earn incentives program.

To win, the Mystic Treasure team is essential. Not just in finding treasure, but also in evolution, our complete set’s synergy is crucial. Only by combining the individual components and accumulating triumphs, we will become unstoppable.

The team is made up of six core individuals and about 16 full-time professionals. Together, we will explore all the talents that contribute to the success of Mystic Treasure:
1. Mr. Winter Lee – CEO, Co-founder Spider Moon
Founded in 2022, Spider Moon Corp is a studio that applies blockchain technology to create play-to-earn games. The first and most prominent product of Spider Moon is Mystic Treasure.For along time, Mr. Winter Lee has aspired to build a sustainable NFT game that benefits both users and investors. Having 14 years of experience in game online publishing, Lee understands thenature of games and the connection between players to mold a fascinating product combined with simulation and RPG adventure. 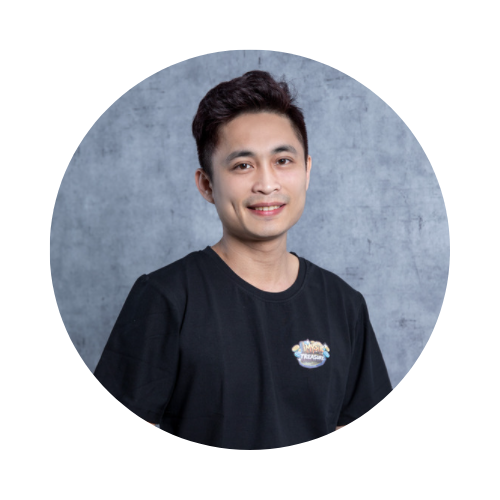 Winter Lee also spent 12 years working in business development, KOL management, and press network where he became a strategic partner of VNG Corporation, NEXON, and Funtap. Besides, he also took the role of product manager at Gamehub.vn and partnership manager at OTA Network.

2. Mr. GAT – Co-founder Spider Moon
In addition to Winter Lee, GAT also got on board with Mystic Treasure. He has 5 years of experience in online game publishing and the technology sector, including a startup called Efcoin. GAT also possesses significant expertise in community management. He will provide the operational excellence that enables the continued growth and success of Spider Moon and Mystic Treasure. 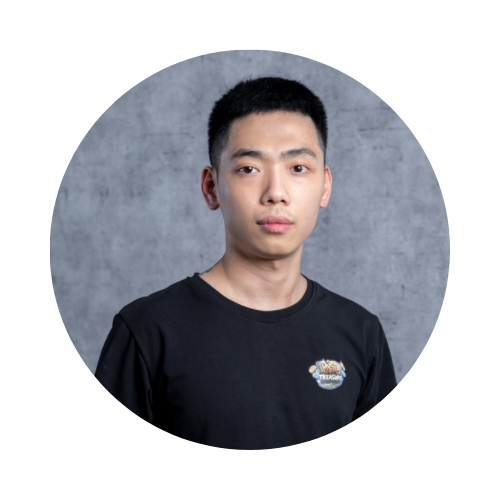 3. Mr. Kaido – CFO, Co-founder Spider Moon
Mr. Kaido is renowned for his reputation in this crypto-verse. He joined Spider Moon from various famous crypto communities, where he was a great influencer as well as lead KOL. Amongeveryone on the team, Kaido has a 4-year extensive background in managing crypto projects and supporting them with sufficient experience to form great strategies to adapt to new challenges.He also has expansive knowledge in building crypto communities with up to 20.000 members.

4. Mr. Stephen Nguyen – Art Director, Co-founder Spider Moon
Stephen got fascinated with blockchain games from the beginning when they started to grow in Vietnam. Then, he made up his mind and decided to participate in Spider Moon to bring his mostdelicate art to the world of play-to-earn. With 15 years of mastering mobile and online game arts, he led and successfully launched different projects such as Happy Farm 2, Gold Miner, and Dynamite. 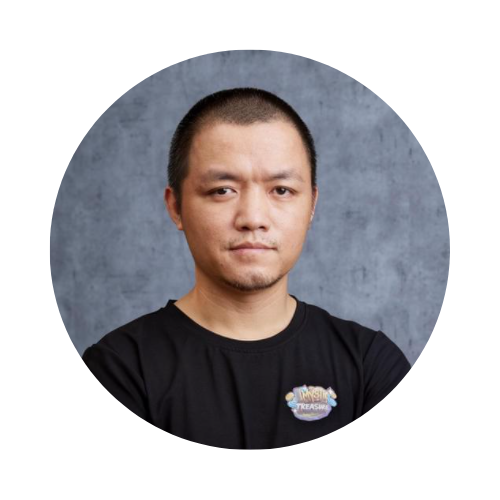 In addition, Nguyen has taken many roles in digital arts and games such as artist at Thien Vuong Comics, artist of Tofu Game Studio from 2012 to 2018, and Tuoi Tre Cuoi Newspaper
And these are the personnels at Spider Moon who commit full-time work on Mystic Treasure: 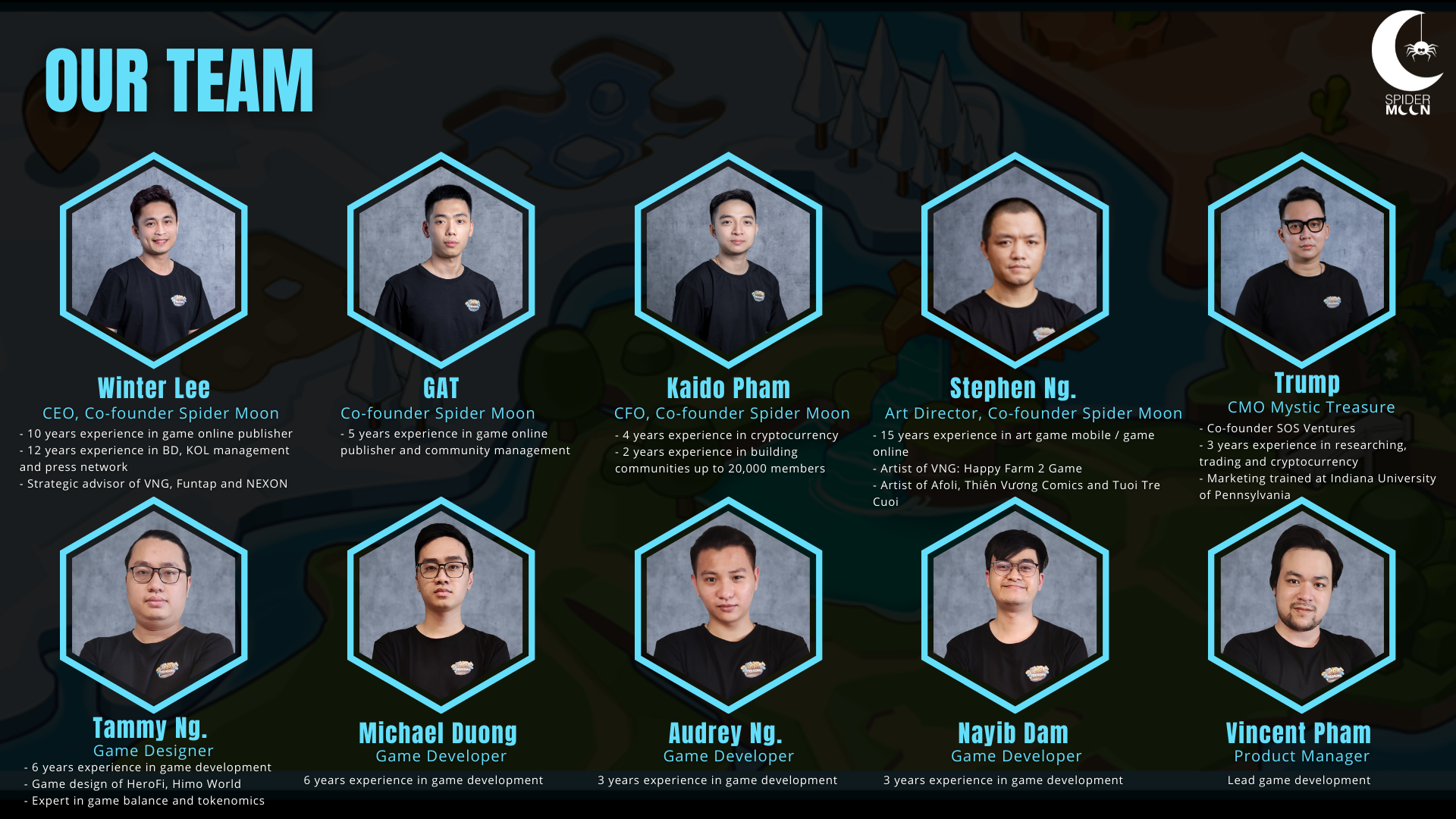 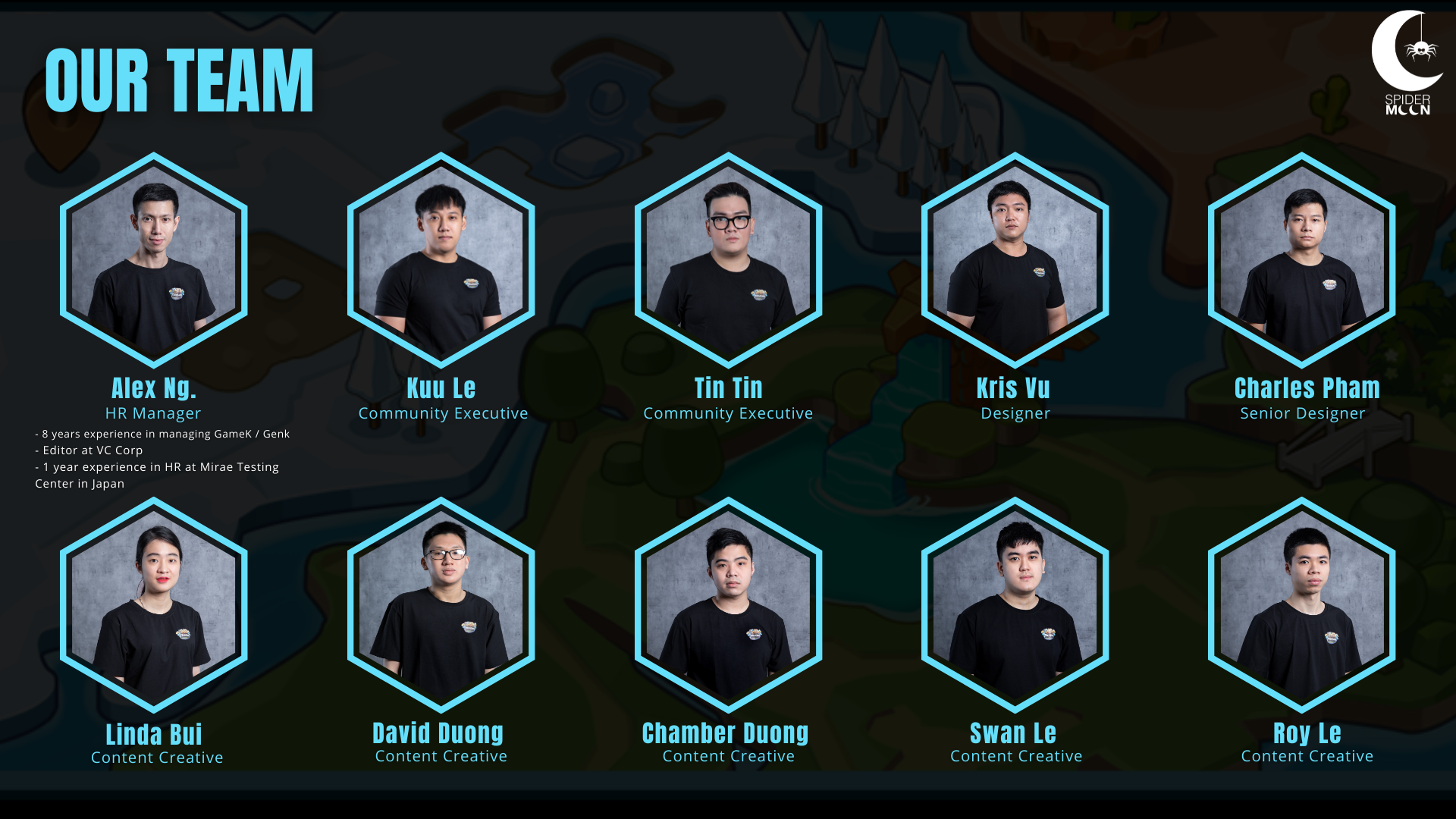 The game is currently in development for PC and Mobile, with beta period planned for both platforms. The calendar will be hammered down with precise dates and detailed goals as we move closer to beta.

Tokenomics
In the universe of Mystic Treasure, the MYT token serves as the utility type. Once purchased MYT, users can earn more with the in-game mechanism which we will cover later.
MYT is a BEP-20 token that serves as the foundation for all transactions and interactions in the Mystic Treasure ecosystem.
About MYT Token – Supply, Distribution, Release
Mystic Treasure consists of 500,000,000 MYT. This number is finite so there will be never more than 500,000,000 tokens existed in-game.

More specifically with the allocation of MYT for investors and gamers to explore: